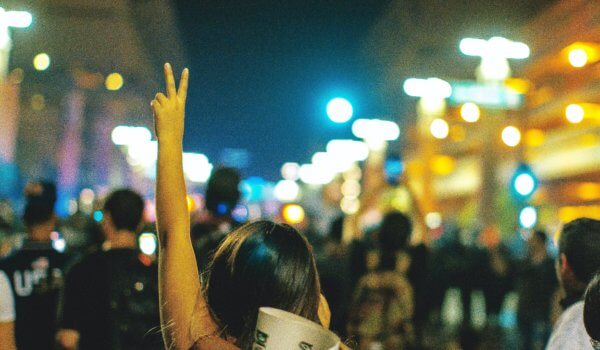 Ongoing protests against police brutality and racial inequality continue across the nation following the deaths of George Floyd, Breonna Taylor, Ahmaud Arbery, and countless other Black Americans. While this rise in civil unrest has already led to legal changes in some states, protesters are finding themselves arrested during these often-peaceful events. Because of this, it’s incredibly important that protesters know their rights and how they can best protect themselves.

Protests have always been an essential part of American life, typically aiming to draw attention to critical issues, events, and injustices. Peaceful marches and powerful acts of civil disobedience have been a part of nearly every political and social movement of the past century. This includes the Boston Tea Party in the 1700s, the Civil Rights Movements of the 1950s and 1960s, as well as anti-war protests of the 2000s. Protesters have the legal right to ensure their message is heard; contrarily, however, public officials and law enforcement have leeway to limit those rights in certain circumstances.

The Rights and Challenges Associated with Protesting

Historically, Americans have relied on protests to hold those in power accountable. The First Amendment gives U.S. citizens the right to assemble peacefully in order to air out grievances in an effort to bring change. While the government cannot prohibit peaceful protest, it can impose restrictions on the time, manner, and place of the protest. This could include ensuring protesters do not interfere with highway traffic or instituting a curfew, both of which we’ve seen with regard to the current protests. It’s important to note, however, that officials cannot block a protest due to its content.

While the First Amendment does allow for the right to protest, it does not protect protests that turn into riots, escalate violence, or involve the destruction of private or public property. Though many of the current protests against police brutality and racial injustice have been peaceful, law enforcement has an obligation to respond if events turn violent.

Law enforcement is responsible for protecting the rights of those who peacefully assemble. The responsibility for protection gives the police broad authority to deescalate violent threats however they see fit in accordance with state and local laws. Police, however, do not have an absolute right to search through smartphones or other personal devices without obtaining a search warrant granted by a judge. In addition, law enforcement officers also do not have the right to delete any content from mobile devices. Meaning that in the event an officer tells a protester to delete a video they took, or deletes it, then they are in the wrong.

Protesters have the right to take photos and videos of whatever is happening at a protest, including videos of law enforcement. Audio recordings may be governed slightly differently depending on the state in which they are being recorded. While some states have one-party consent laws that allow recording in the event at least one person has knowledge of it, others are two-party consent states requiring both parties are aware of the recording; Texas is a one-party consent state.

It is common for arrests to occur at protests involving civil disobedience; however, no matter the circumstances, in the event a protester is arrested or detained they should not resist in order to stay safe. During an arrest, it’s important to invoke your Miranda right to remain silent. In the event a protester is booked into jail, they should call an attorney immediately.

If a protester believes the police or other government officials violated their rights, they have the right to pursue a civil case. The Civil Rights Act of 1871 is a federal statute – numbered 42 U.S.C. § 1983 – that allows people to sue the government for civil rights violations. Section 1983 covers violations of citizens’ First Amendment rights to assemble, speak, and petition.

Law enforcement can claim qualified immunity in order as a liability shield. The invocation of qualified immunity protects police officers accused of interfering with constitutional rights from being held accountable and victims from getting justice.

The ongoing protests across the country and around the world have shined a massive light on the injustices Black Americans face in their daily lives. U.S. citizens have the right to protest and peacefully demonstrate, and it’s important that protesters recognize when their rights are being infringed upon and what they can do to protect themselves. At Feldman & Feldman, our experienced civil litigation attorneys can work to ensure your voice is heard in the event your civil rights are violated. Contact us today for more information on how we can help.