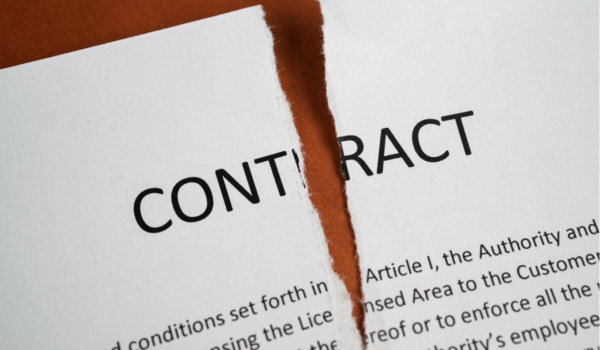 When doing business in Texas, you will inevitably run into some form of contract, either written or verbal, that will create a business relationship with another party. Contracts are meant to put into detail what is legally expected of each party in regards to goods, services, or other concerns. If either party fails to uphold the duties under their portion of the contract, the other party may dispute the contract or claim breach of contract. There are legal consequences when someone does not uphold their obligations under a contract. There is limited time to act, though, as there is a statute of limitations for contract disputes in Texas. There are rare exceptions to the statute of limitations, so filing a claim in time is essential to resolving a contract dispute.

When Can You Claim Breach of Contract?

If you believe that there has been a breach of contract in an agreement you hold with another party, there are certain steps you must take. First, you must prove that the contract was indeed valid. To be a legally binding contract in the state of Texas it must satisfy the following conditions:

While verbal contracts are more difficult to prove, that does not make it impossible. Sometimes the actions of the parties involved can show that a verbal contract existed. Certain types of contracts, though, must be in writing, including contracts for the sale of goods over $500, the sale of securities, marriage contracts, a will or trust, contracts relating to real property, and contracts that cannot be completed in under one year. If you are able to, it is always best to put a contract into writing. This makes it much easier to dispute a term in the contract and/or to show that a party breached the contract.

After establishing the validity of the contract, you must then show that the contract was breached. The elements of a Texas breach of contract claim include the following:

When these elements exist, you can then bring forth a cause of action for breach of contract in Texas as long as you file your civil lawsuit within the statute of limitations.

What Is a Statute of Limitations?

A statute of limitations is the specific time period during which a lawsuit can be brought against a party. The time period usually begins on the date the event in question occurred. Statutes of limitations are used to ensure cases are still relevant and claims are not being brought forward decades after an incident occurred. Giving a party a specific timeframe within which they must file a lawsuit also helps preserve evidence and makes it easier to find witnesses versus many years down the line when they may have moved out of the state or passed away.

In Texas, civil statutes of limitations are typically between one to five years depending on the type of the claim. The statute of limitations for breach of contract in Texas is four years from the date of the breach. If you do not file a lawsuit within that four-year period, your claims may be dismissed and forever waived.

Exceptions to the Texas Statute of Limitations for Breach of Contract

The business contract attorneys at Feldman & Feldman have extensive experience in contract matters, regardless of whether a client is presented with a contract that needs reviewing or is currently battling a contract dispute. Feldman & Feldman can assist you with your business litigation needs. Call us today to request a consultation.