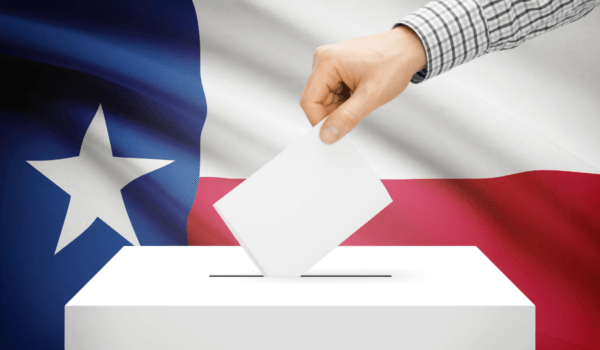 Texas has passed a far-reaching election law with new rules that dictate how people can vote in elections. This new law is drawing nationwide attention in the controversy over voting rights, as is similar legislation in other states. Now, Texas is facing several lawsuits challenging the legality of the law. One has been filed by election workers who could be punished by the law. The other has been filed by the U.S. Department of Justice, which files lawsuits when states or entities violate the Voting Rights Act of 1965 or the Civil Rights Act of 1964.

Among other things, the new Texas law (SB 1) has made the following changes to voting in the state:

The legislation was signed into law by Governor Greg Abbott on September 7, 2021. It will be in effect for the 2022 midterm election, barring action by a federal court or passage of a law by Congress. The Republicans who pushed for and passed the law have argued it is necessary to build voter confidence in elections after the 2020 election. Democrats staged a walkout to try to prevent passage, claiming the new election law is unnecessarily restrictive and will take the right to vote away from many people.

The new law adds a host of criminal penalties for those who violate its provisions. Many penalties have been upgraded to felonies that can lead to jail time. Election officials can now be sent to jail for what may be good faith errors in doing their jobs. One prohibition makes it a crime to “solicit” mail ballots and punishes it with jail time and a $10,000 fine. The new laws target election officials and poll workers in an environment where they are already facing physical threats to their safety.

The most recent lawsuit has been filed by two election workers who claim the law prevents them from doing their jobs without fear of criminal prosecution. One of the plaintiffs is the top elections official in Harris County, Texas, and the other is a volunteer deputy registrar (VDR). The plaintiffs are being helped by a nonpartisan center for voting rights that challenges laws it believes are restrictive. After filing the lawsuit in November 2021, the plaintiffs are now seeking an injunction against the law. The case was filed in federal court in the Western District of Texas.

The complaint alleges the elections administrator will not be able to give honest answers to voters’ questions without opening herself up to prosecution that carries a six-month minimum jail sentence. She has been vocal about mail voting in the past and claims that her speech will be silenced by the new law. The complaint notes the irony that it is illegal to solicit someone to vote, but it is legal to discourage someone from casting a ballot.

The VDR also alleges she can go to jail simply for doing her job. According to the complaint, her door-to-door voter outreach could be a crime if she says the wrong thing. She claims she could be prosecuted in her capacity as a public official.

The Department of Justice Also Has Filed a Lawsuit

This is not the first lawsuit against the new Texas voter law. The Department of Justice has sued Texas in federal court, challenging two aspects of the law. The DOJ’s lawsuit focuses on the effect the new law will have on the right to vote, as opposed to the ramifications for elections officials and poll workers.

Second, the DOJ alleges the law’s requirement for election officials to throw out ballots for immaterial errors and omissions will take away people’s right to vote. The law requires that voters include things like driver’s license numbers, partial Social Security numbers, and voter identification numbers. Errors can lead to the rejection of the ballot entirely.

The DOJ is not asking the court to throw out the entire Texas law. Instead, it is only asking that the court strike the sections that are at issue in its lawsuit.

Plaintiffs have challenged many of the new voter laws in several states. Georgia faces numerous lawsuits regarding its restrictive voting law from both voting rights activists and the DOJ. At some point, one can expect the United States Supreme Court to decide one or more of these lawsuits. However, it may be a stretch to expect the Supreme Court to strike down any of these laws given Chief Justice John Roberts’ history of reining in the Voting Rights Act. Barring Congress’ passage of federal voting legislation, one can expect these laws, including Texas’ SB 1, to be effective for the 2022 midterm elections.

Contact us today to schedule a consultation or to learn more about Texas’ newest election law. The lawyers at Feldman & Feldman can work for you to protect your best interests.