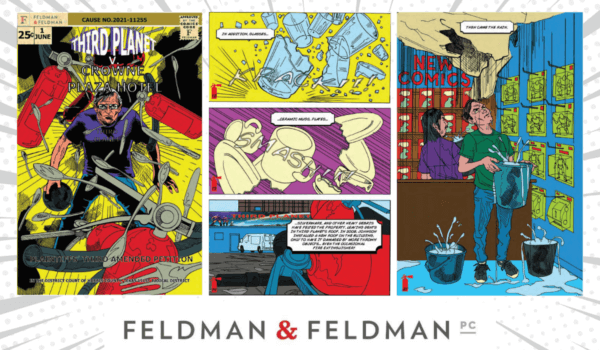 After years of damage and frustration resulting from objects being thrown 19-stories onto its roof, Third Planet Sci-Fi Superstore decided to finally fight back against the large hotel next door in the most unique yet appropriate way – with a full-color comic book lawsuit. The comic store filed a lawsuit in February against its hotel neighbor, the Crowne Plaza River Oaks, for negligence, nuisance, and trespass after the hotel’s guests threw a variety of objects down onto Third Planet’s roof causing significant damage. Some of the objects included fire extinguishers, ladders, luggage racks, plates, glasses, ceramic mugs, and cigarettes – necessitating expensive repairs inside and out. The Houston civil ligitation team at Feldman & Feldman worked with the owner of Third Planet, T.J. Johnson and four artists from Bad Cog Studios to create a custom comic book depicting the case’s fact pattern that was submitted with an amended version of the lawsuit. The artists – Michael Charles, Maurice Terry Jr., Michael Brooks, and Benjamin Carbonero – worked hard to include all details necessary to show the negligence of the Crown Plaza River Oaks as well as the frustration felt by the comic book store’s owner.

Third Planet Sci-Fi Superstore has been a staple in the Houston community since 1975, moving to its current location off the Southwest Freeway feeder near Kirby in 1988. It is currently believed to be the longest running independently owned comic bookstore in the country. Over the years, Third Planet has become much more than just a store that sells comics and graphic novels, it is a place where artists can gather and discuss their work, kids and adults can find a community of friends who enjoy the same comics or games, and even a place for local sci-fi events. Third Planet has survived hurricanes, never-ending Houston construction, and neighbors who have tried to buy the store out. T.J. Johnson is determined to preserve this part of Houston’s history as so much has been lost over the years. While the store still stands strong, the constant barrage of items thrown at it by guests at the hotel next door makes it difficult. Johnson attempted to solve the issue on his own multiple times by making a number of reports to the hotel about the damage to his store. The hotel has not made any efforts to stop the damage from occurring. After having to repair the damage caused by 14 solid metal fire extinguishers being thrown from hotel balconies onto the store roof in March of 2019 and the resulting subsequent water damage, Johnson had had enough and contacted our law firm for help.

You may wonder – can you even file a lawsuit containing a comic book? The answer is yes. A full-color comic book may be an unconventional way to file, but it is fully legal since pleadings in civil cases are not required to be black-and-white typed documents. The format is flexible. The comic book was also not the original pleading filed – it part of the plaintiff’s third amended petition. The defendant’s legal team claimed to not understand the previous petitions, and the comic book format was a very easy solution to ensure comprehension. This type of pleading may be the first of its kind. When asked, former Harris County Judge Daryl Moore said that he had never seen anything like this on his docket. Because Third Planet is a comic book store, this sort of representation of its side of the story is appropriate. Our legal team also appreciated the creation of the comic, as many of us grew up spending time in and buying products from Third Planet. The process of writing and illustrating the comic book took two months and involved our team and Johnson working closely with the artists.

This process, while a bit outside of the box, was one that everyone involved appreciated. “Having the opportunity to work with these guys has been a blast, but it’s been even better because ultimately it’s being done to hold a bad corporate neighbor accountable,” one of our legal team stated when interviewed. “To know that we’re going to see some justice in this at the end of the day is what makes the collective effort so cool.” Feldman & Feldman commissioned the artists, friends of T.J. Johnson, who were also long-time customers of the store, to create the comic. Accompanying the standard and required legal text, the illustrative team drew the comic book in the court filing using a 70s and 80s comic style to represent just how long the shop has been continually operating in Houston.  The comic book depicts the long history of damage and frustration Johnson has faced, including two fires that started after hotel guests threw lit cigarettes at the store necessitating the installation of a new roof in 2008, which ended up being damaged almost immediately again by hotel guests. After thousands of dollars in damage, and decades of repairs, Johnson is seeking monetary relief of more than $250,000, as well as the closure of the hotel for one year after judgement. For a store that has been a huge part of Houston’s history for 46 years, Third Planet deserves justice.